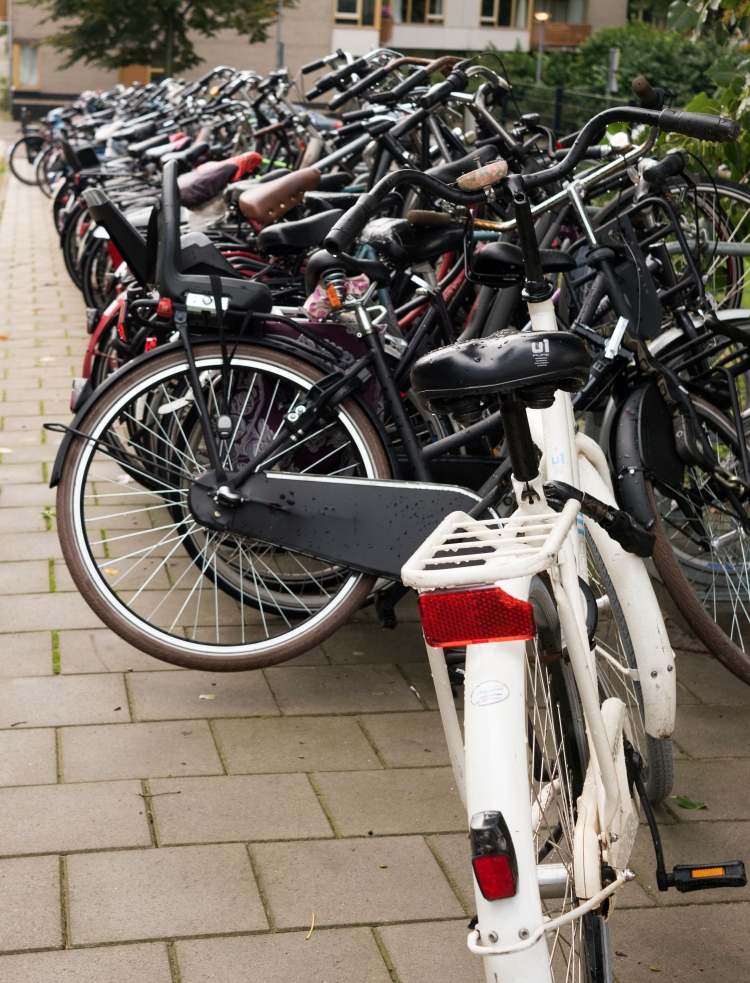 I’ve just returned from a week in Amsterdam where I immersed myself in the bicycle culture. From the moment I got on the heavy, matte black bike with a comfortable seat and upright handle bars, I felt at home.

But the first ride through the city was a shock. So many bicycles! And they were weaving and turning and passing at a rate faster than I was prepared for. I had brought my American bicycle sensibilities of waiting and looking both ways and gawking at the scenery and it didn’t work! I had near collisions at many corners and at one point, I almost ran into a pedestrian.

Days went by before I realized the great dance that is Amsterdam cycling. Instead of stopping before turning right, you just turn. Those behind you will adjust. It is a beautiful give and take that only a culture steeped in bicycle travel offers. There are some cars. And crazy scooter drivers winding between the throng. But it all works because the bicycle comes first.

Of course, it’s also flat in Amsterdam. And the city is small and I never broke a sweat (except for a few tense moments!). I observed every kind of outfit as traveling gear and it wasn’t spandex. Skirts and suits and high heels and wing tips were the norm. Ordinary folk commuting to work or the store. No helmets or bicycling gloves. And when it rained, a few ponchos popped out and umbrellas carried with one hand…but most just kept on riding to their destinations where, most certainly, waited a dry pair of shoes or a different shirt.

One day, we bicycled to a small town south west of Amsterdam called Ouderkerk where half of the town was reached via a one lane bridge being hand scraped of paint. While wandering with cameras in hand, we witnessed the most amazing sight: around 3:30 in the afternoon, waves of bicycling children rode down main street, sometimes two or three abreast, laughing, smiling, talking loudly. Some of them shared an image on their smartphones or rode with scooter towing bicycle…a mix of modern and traditional. Later, the direction reversed with soccer sticks tied to handle bars and bright jerseys in contrast to the dark bicycles.

I wanted to stay forever.

When I returned home, I was eager to retain some of that Amsterdam bicycle experience so I hopped onto my bike and rode 6 miles to the garden where I work one day a week.

But it wasn’t at all the same. I rode my wide, white striped lane next to cars going 60 miles per hour. It was noisy. There were hills. And I was alone.

Ultimately, that was the heartache: No sea of faces to swim in, no sound of bells letting me know someone was passing, no overheard conversations. Just me and my mountain bike.

Here on the rural island where I live, the cities are small and far apart. While the grocery store may be close, the school isn’t. And most of the houses are spread on 5 acre parcels between the cities. Cycling as a mode of transportation is neither easy or practical. And it is secondary to cars because we live in a car culture and no amount of adding bike lanes will change that. We make our choices to embrace the bicycle as individuals, not as the collective.

So I took note when this quote drifted across my computer screen.
“Ask yourself what is really important and then have the wisdom and courage to build your life around your answer”
Lee Jampolsky

I am determined, as much as possible, to build my life around the magic that was Amsterdam. But the epiphany is that it wasn’t really about bicycling although that was certainly fun. It was about connection. Riding among the locals, I felt a part of that city and its values and I wanted more of it. Now that I am home again, it’s time to examine my choices…and then have the wisdom and courage…..

View all posts by Jeanne Celeste